ANOTHER FIRST NATION STANDING TALL! May the Spirits Guide you Well!!
A’Ho 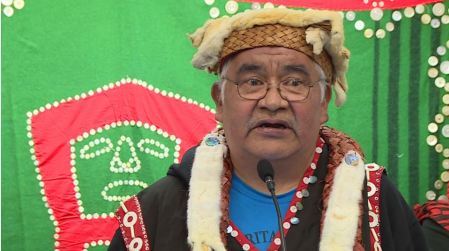 Chief Willie Moon, the elected and hereditary leader of the Dzawada’enuxw First Nation, speaks at a Jan. 10 press conference in Vancouver. (CTV News)

In B.C.’s remote Kingcome Inlet, the Dzawada’enuxw First Nation is fighting to remove all fish farms from their traditional territory — farms that they say they never approved.

To evict the 10 area fish farms, the Dzawada’enuxw have launched a lawsuit against the federal government, claiming that Ottawa failed to consult with them when allowing fish farming in the region.