Red Rock Canyon, Mojave CA. What a find! Wildflowers, was not expecting it at our lunch stop out to Trona Pinnacles. 2015

Yes, we were seeing green in the desert around us as we were driving up from LA. Small patches here and there, But this took us by surprise…..

So, we stayed a little longer than planned and decided to check on the wildflowers when we came back from Trona if we had time. We were in a remote-er area and wondered what would be over the hills in the main canyons.

On to Trona Pinnacles, got the spot we wanted just in time. Couple vehicles pulled up and talked of having dozens of cars following to that spot. Explained we were doing night photography, won’t work too well. They moved on.

We set up camp and got ready to shoot sunset and stars. 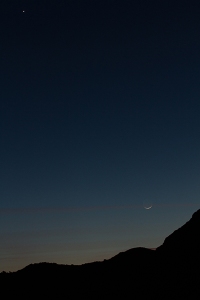 Setting crescent moon and I think Venus in the top left corner. Trona 2015

Then the clouds moved in. Could not see much myself but, you can see the effects in this photo.

Not much of a sunrise, coffee time. 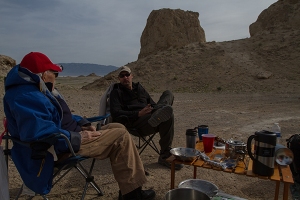 Then as the BIG group started showing up we realized our peace and quiet had ended.

Fireworks going off behind our light painting. Trona Pinnacles 2015

And during the day,

Hole shot! Found a hole to climb into. Note kids running up the hill. Trona Pinnacles 2015 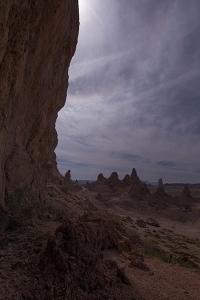 Yes, little bit of greenery out here. Have to look careful for the flowers. Trona Pinnacles 2015

Playing with black and white out in the field. Later doing a conversion myself. Trona Pinnacles 2015

So it was a good trip, timing was good. The group of people and a film crew Sat. morning broke up the quiet of the place, but it is a favorite of mine to study light. Very primitive camping out there, no water. Here are some more photos from the trip.

I use a remote trigger, so here I am walking down from checking a flash unit. Trona Pinnacles 2015

This time I’m walking down with my red light on and the flashes triggered too. Trona Pinnacles 2015 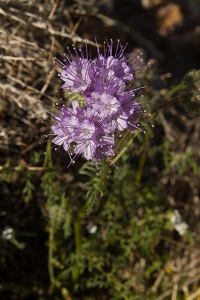 Anyway, hope you enjoy the photos. Leave me a message in my comments if you have questions about any of the photos.

If you would like to hire me as a guide of sorts, contact me and we will see what I can arrange for you and what you want to learn about photography.

In the mean time,