Pershing Square, downtown Los Angeles, was the site of the Autumn Lights Event. A nighttime venue of different light orientated displays. Most were moving lights so ISO speeds were raised to a faster setting, but I wanted to keep the nighttime theme so I didn’t raise it real high. I kept my pictures dark so you knew it was nighttime. Let the lights shine. It started as the sun set so some of my first photos were just to get a feel of the events going on and to see on my camera’s LED screen how it looked. When you shoot digital don’t be afraid to try different setting and just shoot the shots. You can always delete them later after you look at them on the computer. Try to avoid deleting by what you see on the camera LED screen. Always carry spare batteries and memory cards. I personally start out every shoot on a empty card so I know I have room for lots of photos. Since I started out shooting film I try to make every shot count but I am more relaxed now at shooting digital to where I just shoot the shots and review them later on the computer, unless I get a shot really wrong and know I can’t save it with Photoshop or Lightroom.

In this first shot, there were lots of people looking in a 3D viewer contraption. Shooting to get the light of the viewers and let the people be dark set the mood I wanted. The people still blurred and ghosted as they moved about but the viewers come out as a multi-headed beast in the center. 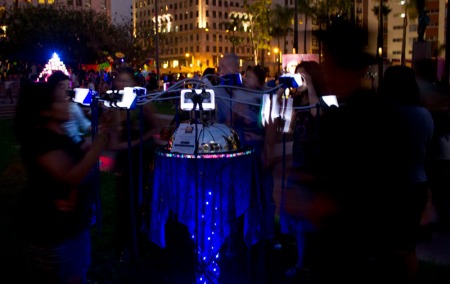 In this next shot people were painting with black light paints on a common canvas. Again I wanted the paintings to show up and the people to be secondary. Some motion is visable in the shot. I had my White Balance set to daylight so the street light in the background has a yellow cast to it similar to what the human eye sees. Noticed that the colors in some of the clothing is blue from the black lights. But the canvases have a white look to them from the whiter spot lights on them. 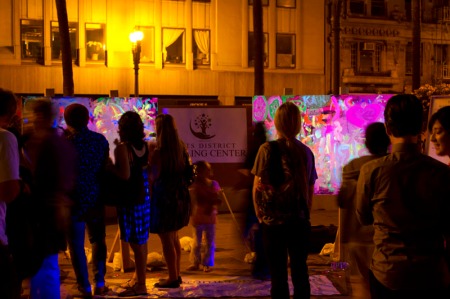 This next shot I was walking past the sign when the little girl stepped up to it. I grabbed a quick shot and she left. People were moving all around so I didn’t have much room or time to compose the shot. Personally I like it as it is, the glow of the sign lights up the girl’s face, but the sign isn’t burned out. 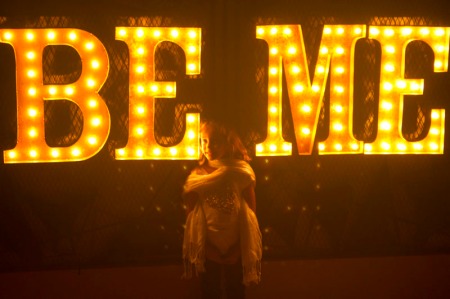 I shot a lot of shots of this next scene, and this is the best. Solid images with sharp edges, a blurred image and different colors on the screen. It was shadow dancers and they were moving pretty fast. Again I wanted the dark of night to show though in the picture. 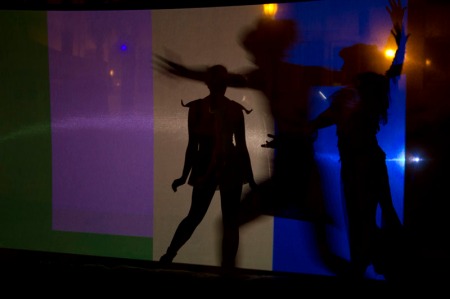 Here again is the play of black lights, black light paint only now the canvas is a human being. Getting the colors to glow like it does to the human eye was the challenge. 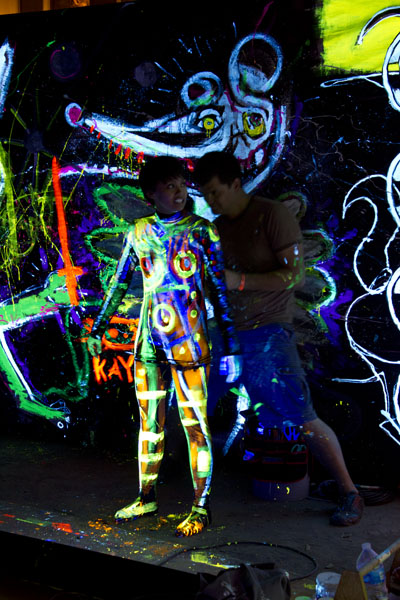 These next 2 shots are a a wheel that was divided into four parts alternating mirror and clear. As it spun around you saw yourself and then someone on the other side. To photograph this I wanted to show the 2 images merged. These are two of the best of that. If you look closely you can see the image of the person standing behind as well as the person reflected in the mirror. The person behind shows up clearer in the images. 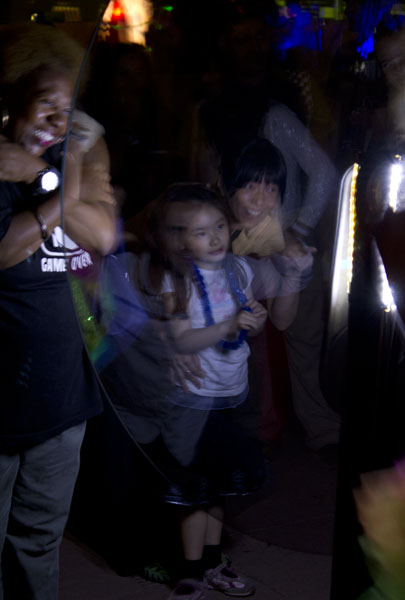 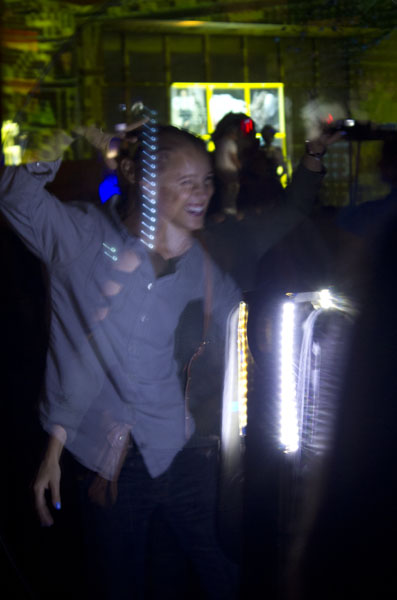 This next shot was of some fish mobiles. I shot several shots of these and at different times to get the right effect. Early on it was too light in the sky and the fish’s lights didn’t show up well. In the first shot I was coming back by and shot this at ISO 1000 and liked the way it turned out. In the second shot I came by and just happened to see a woman come up and grab one of the mobiles and kiss it. I missed the kiss itself but still got her in the motion of it. It is stop action as I had my ISO at 2000 that time. Notice the difference in the texture of the lighting the two shots. 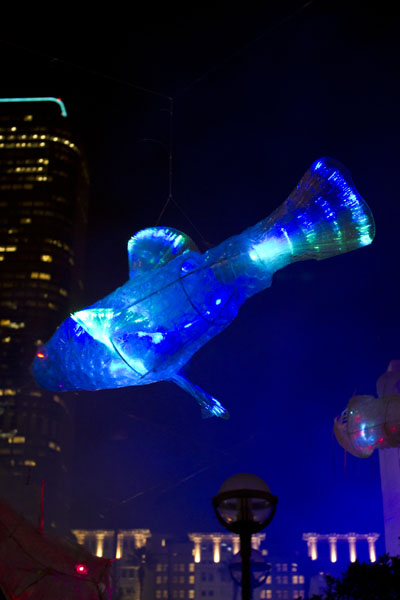 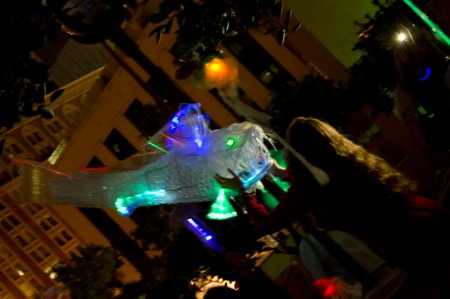 As if it isn’t already evident, I’m shooting without a tripod, trying not to blur the photos myself as I press the shutter. In working with such a crowded area I felt it was better to forgo the tripod and increase the ISO.

Here is a neat effect of lights inside the objects I shot. 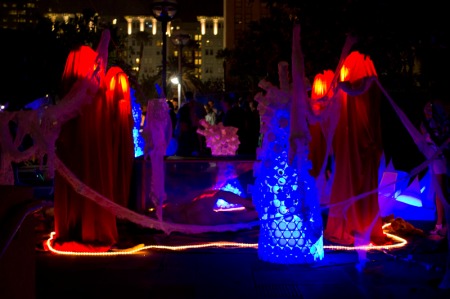 Here I shot several walls of video displays, shooting faster to stop action to video. In this fist shot I think the video had stopped. Notice how light the scene is, the digital camera sees very well in low light. I wanted the cut out characters to show up and the people weren’t moving much so I slowed the shutter down. 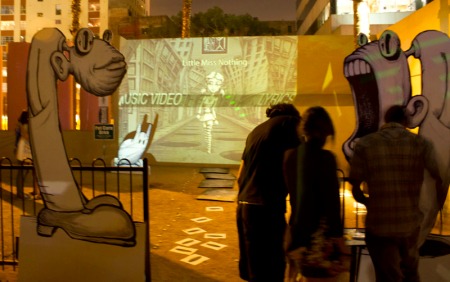 Here is a darker scene, of a different video. 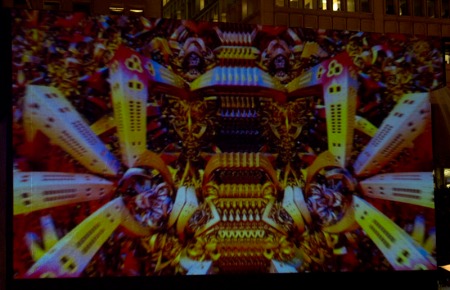 Here I shot it slower and the water is showing motion to it, if you look at the video there is motion in it as well. 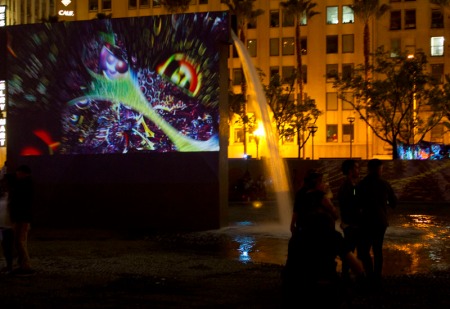 Of course there was music there and here is a shot of one of the bands that played. 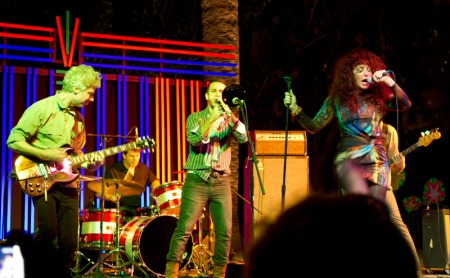 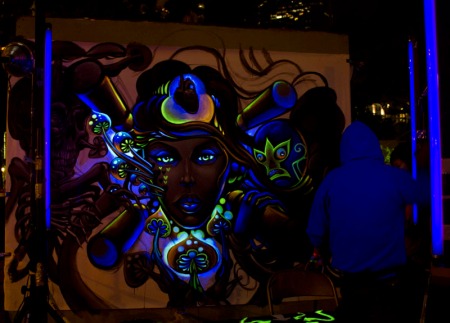 Well I hope this gives you some ideas as to how to set your camera so that different lighting scenes in the dark of night come out for you. I will do a short post on laser lights next. I was a t a party where the person had a laser show in his backyard. People were shooting pictures with their cell phone cameras with the flash of course and not getting the lights. So I brought out my camera and started shooting. The results were interesting.

If you enjoyed this post please tell you friends about it. I’m new at this and still learning about posting a blog and of course I’m always learning something new in photography.